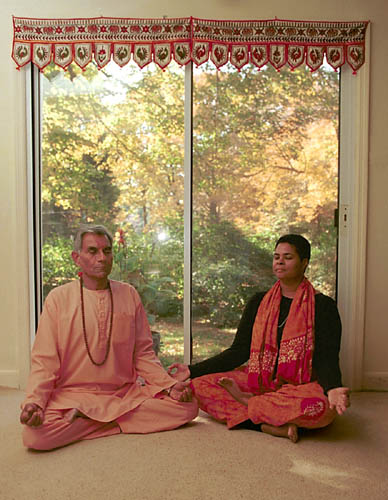 Giant amounts of Gratitude for my Yogi-Guruji The Late Shri Radha Kant Jha. For his blessings in all forms that he shared with me. The previous post is for my first Indian Yoga Teacher: Dr. Tripathi in Benares, India. It had been a life long dream to study yoga in India and when I found out about Benares Hindu University from a professional colleague of my husband [again and again my story always shows how Randy always finds a way to make my dreams come true!] who is from this ancient city and school (Dr. Alakananda Mukerji) the dream began to come true. More about that experience in another post as this one is to be dedicated to Shri Jhaji as his Ranchi students refer to him. I was feeling so positive after starting my studies in the oldest city in continuity for human history, Benares. Benares Hindu University (BHU) is one of the oldest schools, and I was blessed by Dr. R.H. Singh as he directed me to study in English with Dr. Tripathi.

Then here on US soil a Yogi came looking for me!! The year was 2000 and it was the 108th year since the first Yogi had reached the USA and the Indian government sent a delegation of 108 Yogis from different paths to commemorate the occasion at the United Nations. Shri Jhaji was a member of this delegation and his daughter was then living in White Plains a town near me. In his spare time he would call local yoga studios to see if he could volunteer his services. One day I answered the phone to his request and could not believe my ears. We arranged to meet the next day at his daughter’s home and I was to bring him over to my studio to see if he felt comfortable in the setting. On the arranged day, time and location I sat in my car awaiting to meet this Indian Yogi. I was perplexed as I was waiting quite a while until then I saw a person who I could make out to be this Yogi come rushing towards the car. We made our introductory greetings and then he apologized for being late and his excuse knocked me over! He had rushed away from the UN delegation of 108 Yogis in New York City to rush back to Westchester to meet me and the commute to suburbia took longer than he expected!! I felt embarrassed that he would leave such a prominent gathering of such international spiritual significance to come meet little ole me. When I expressed this to him he had a very convincing manner to help me to understand that it was perfectly alright and as it should be, our meeting was important. Its importance I still am recognizing years later after he is no more in his physical form, the blessings keep washing over me. He did also let me know that there were public forums that he could invite me to attend to meet the congregation of Yogis in New York City with him and that was one of many amazing experiences that Shri Jhaji shared with me. When we went to a big program in the city for the Yogi delegation Shri Jhaji spent time on the dais as well as sitting with me in the audience and I felt like a Yogini celebrity. He always made great efforts to introduce me to those he knew.

Shri Jhaji went to great extents to meet all the Indian American organizations in the USA and especially New York City and Westchester. He regularly attended the Arya Samaj group in White Plains and always asked me to join him and I did not. Shri Jhaji did in fact feel comfortable in my studio and with my yoga student participants so much that he was present for all six days per week and some days I conducted two classes a day. So I thought he should at least have one day Sunday for rest from me and my gang and to share with his daughter and her family. On the occasion of his one year anniversary of Mahasamadhi his daughter Vineeta asked me to join her for a home puja to remember him and I did. She asked me at that time to go with her to the Arya Samaj as she also had not ever attended with him and he so wished that we both would attend. So we did find the next meet date and attended. Immediatley I felt such acceptance from the whole group. I have spent many years attending regularly and often now do meet the members at other functions. I have formed some great friendships with a few members that are ever-present in my life now and it is all thanks to Shri Jhaji.

I could go on for days blogging here with remembrances of Shri Jhaji but I will try to be kind to those following this blog and be brief. I can find other occasions to share about Shri Jhaji. I am so grateful for all the times we shared teaching together. I learned so much only because it was the right time for it all to happen. It was the right time for me to answer the telephone when he first called. It was the right time for him to leave the delegation to meet me. It was the right time in my teaching career as I had been practicing since I was very young and now mature. I had been teaching after being certified for about ten years then. I had been to India and could have reference to many things he would be explaining to me. My lessons came as we taught the classes together. I can’t quite remember it exactly somehow he would start the class always with the Sanskrit invocations, which I was then hesitant to install as many of my students were so very American and resistant….that all has changed….I even learned classical hindustani vocal music with harmonium to lead the invocations all due to his teachings. Somewhere we would trade-off and each one lead different parts. He always began the class and ended with Yoga Nidra and closing invocations. This went on for many months about 8 or so before he returned to India. But somewhere in those 8 months I began to channel his teachings so well that I was able to lead the classes in all components and my own students watched this process and my blossoming. One day he said, as he confirmed the beginning of the shaktipat transference, that he knew he passed on his powers to me so much that I had now had more powers to lead the practice than he. When he said this I had just concluded the practice and was in tears of bliss and my students commented on the whole experience they felt in their bodies and witnessed. This all is and was too much to bear for I am known to be a funky open fun-loving person but I really am humble in all respects. But I cannot express with words what his teaching has and continues to provide for me and those who practice with me, it is still unravelling. As I mature in my practice I know more about so much more including: shavasana, (corpse pose) from seeing my favorite brother and my mother’s transition and also Shri Jhaji. I know more about how spirit transcends, how to honor spirits and to keep the energy close for guidance and support and so I find I do not fear death the more I honor these spirits. Of course there are more who have been there as a guide for me as my favorite Grandmother walks with me always since I was 17. I guess I will just end this here by saying that there will be more forthcoming and that as I age I do so with pride and gratitude so there is no need to hide any aspect of my being older. I learned a wonderful practice in India that when it is one’s own birthday the gifts are given to others for sharing the occasions to show one’s own gratitude for their own life. Dhanyavad and Namaste